I’ve seen many reviews not wanting to post “spoilers” so I’m going to start off with a warning  that what I am about to say may be seen as a spoiler to some. (Even though I personally disagree.) Consider yourself warned.

The good son is about a twenty-six year old Yu-Jin waking up to find his mother brutally murdered in the apartment they share. He has no recollection of the night before and he is covered in blood. So begins this extremely claustrophobic tale about a psychopath going off his meds. Which is an interesting enough story and I wish it had been sold to me that way. If I had known I was going to read “Korean Psycho” I would have prepared for that and enjoyed it immensely!

However, it was sold to me as a mystery, a who-dunnit, and it is not that! It’s a chilling portrait of a disturbed young man going through some existential crisis while figuring out his life and feelings (or lack there of).

The whole book spans over just a few days and it’s mostly in Yu-jin’s head and thoughts, which is what makes it so claustrophobic and so unbelievably good! It’s creepy and I kept sitting with this intense “get me out of here” feeling. But it’s too interesting and exciting to be inside the mind of a psycho, that I found myself lost in the pages and biting my nails!

It’s a slow burn. I’ll say that. But I also spent half the book waiting for a twist of some sort. (Oh, how american pop-culture has destroyed our expectations with this!) After I realized that there was no twist and I was trapped in Yu-Jin’s thoughts it was much easier to read, and the pages started flying by. 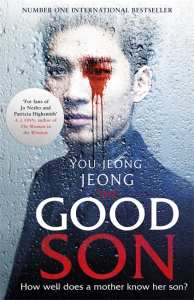 This is my first venture into korean literature and I have to admit that the writing style (or translation?) took some getting used to. Just as with the french “lullaby” I just read. But the way it was told was still familiar in a way.  It made me look to asian cinema – thriller/horror specifically – and how some of the creepiest movies I’ve seen are the asian ones that lurk under the surface. Which just so happen to be some of the best movies I’ve ever seen and that have stayed with me through the years. (Gin Gwai, Shutter, Forgotten, just to name a few.) So if you like asian movies, you might also enjoy asian books.

I’ve said it before, and I’ll say it again; there is value in reading literature from around the world. Get out there, out of your comfort zone, see things with new eyes and read completely different lines than what you are used to! It expands the mind and the perspective in so many amazing ways!