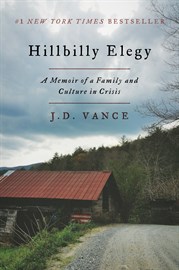 This one crept up on me. Just when I had it pegged for a decent rags to riches, coming of age, type memoir, it went and changed into so much more for me.

“Some people may conclude that I come from a clan of lunatics. But the stories made me feel like hillbilly royalty, because these were classic good-versus-evil stories, and my people were on the right side.”

J.D.Vance grew up in a poor Appalachian town in an unstable environment. His mother unable to keep a relationship, a job or clean, Vance leans on his relationship to his grandparents Mamaw and Papaw, and his sister Lindsay.

We follow Vance through his childhood and scraping by high school, as he enlists in the United States Marine Corps, graduates from Ohio state University and Yale Law School up until now.

Vance has earned the advantage of a unique point of view after living lives on both sides of the fence. He analyzes and reflects very well on the political, psychological and behavioural way of the working class along the rust belt. He’s insightful and sympathetic to both sides, which is a rare feature. When looking upon two opposites, people usually pull to one side, but in Vance’s world, they live amicably side by side. (Though sometimes at war with each other, balanced together.)

“The wealthy and the powerful aren’t just wealthy and powerful; they follow a different set of norms and mores.”

My favorite parts are the ones where Vance has a foot in each world and where he has grown into an understanding of the balance of it all. He speaks warmly of the coincidences and people of different social rungs that has helped bring him to where he is today, and acknowledges the importance of social capital. Not only in the elite, but also in the hearts of the people that has touched his life.

“Shocked, I asked Uncle David what he planned to do with illegal drugs. So he got some cigarette paper and a lighter and showed me. I was twelve. I knew if Mamaw ever found out, she’d kill him.”

It is of course, full of horrifying growing up stories that will make you gasp or shake your head. Stories about neglect, violence and most likely ignorance. Stories about not feeling good enough or not fitting in. Stories that make you wonder how he even survived.  But he doesn’t tell them with resentment, but with a hint of nostalgia at times and lost hope at others. And still he speaks about keeping hope, and never losing it for the people that you love. And if you couldn’t find anything else to relate to in this book, then I believe most people could relate to that.

“For there are no villains in this story. There’s just a ragtag band of hillbillies struggling to find their way – both for their sake and, by the grace of God, for mine.”