I think no book has ever created a larger media frenzy than “A million little pieces” by James Frey. He sold buckets of his memoir and then it came to light that it was slightly embellished or even altered. Then he went on talk shows to defend his choices or to explain himself or to apologise to those who felt conned? I don’t know… I remember him getting an hour on Oprah to talk about it. She was pissed if I remember correctly.

I read the book out of curiosity after all the hullaballoo, as I assume a lot of people did, which just raised sales even more and it just goes to show that there’s no such thing as bad publicity.

I liked the book, I didn’t mind the “based on” part at all. It could have been fiction and it still would have been a good book in my opinion. I enjoyed his writing style, I enjoyed the emotion behind it and the way he wrote dialogue. (I’ve heard that this way of writing isn’t unique, but it was my first encounter with it and I found it refreshing.)

Last weekend I went to a flea market and what did I find in the bargain box for only 2 dollars? A brand new, unread James Fred book – My friend Leonard. Apparently it’s the sequel to A million little pieces, so I picked it up. It’s been more than a decade since I read the last one, but since I remember liking it, and it’s stuck with me all these years, I figured it was worth a try. Beside it was also A million little pieces, but I don’t usually re-read books, unless they’re full of poetry or prose that warm my insides. And there was “Bright Shiny Morning” by Frey, so apparently a Frey fan had donated to this flea market. I picked up the latter.

I’m starting with “My friend Leonard” to sort of pick up where I left off 12 years ago. 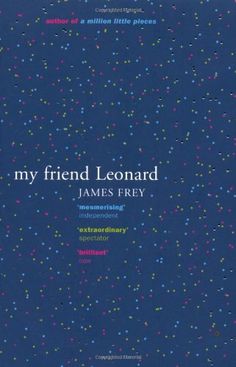