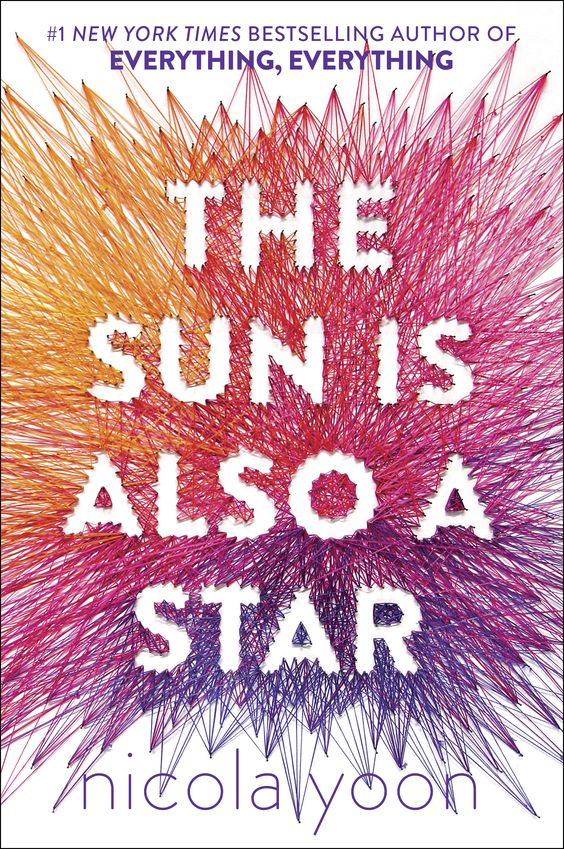 “I have to look away from him. I don’t want whatever is happening between us to happen, but it feels like trying to stop the weather from happening.”

The sun is also a star follows Natasha and Daniel through that one fate filled day that they meet and fall in love. I adore stories that spans over a short period of time, just like The Catcher in the Rye and before sunrise. Sometimes the small movements, thoughts and reflections of things matter more to me than a lot of story.

Natasha is running against time trying to stop her whole family from being deported to Jamaica. She’s practical and level headed and relies in science and facts.

Daniel is on his way to a college interview that he doesn’t want to go to, he wants to be a poet and lets his feelings and whims guide him.

The book changes perspective between Natasha and Daniel, between reality and fantasy, between, science and faith. And in between the two lies the universe with it’s own ideas.

I can relate to both of them and I adore both their voices. It’s a personal journey for me as I’m mixed race myself. There are absolute gems hidden in the writing that fills my heart in so many ways. There’s a story of how Daniels mother struggles with naming her children that made me tear up and hold the book close to my chest. Hugging the words, taking comfort from them.

“Names are powerful things. They act as an identity marker and a kind of map, locating you in time and geography. More than that, they can be a compass. In the end, Min Soo compromised. She gave her son an American name followed by a Korean personal name followed by the family name. She named him Charles Jae Won Bae. She named her second son Daniel Jae Ho Bae.
In the end, she chose both. Korean and American. American and Korean.
So they would know where they were from.
So they would know where they were going.”

The book tackles serious topics as well as the mushy romance and the concept of fate, it’s such a beautiful contrast in itself how everything the book speaks of lives on blurred lines and is never black or white. This speaks to me personally as I always feel like a contradiction within myself.

And while the book may have a soft romantic meant-to-be sort of thread pulled though it, the setting is New York and the cruel hard reality of the world we live in, perfectly balancing it and never making it cliche or too soft.

In many ways it also reminds me of the movies “crash”, “Go” and “Magnolia” – in that it shows how things are connected and follows random characters on a bi-adventure of their own. Reminding us that we are not the center of the universe, and every person we meet has a narrator of their own.

This book is truly special and I’m so glad I found it. Should I ever lose my way and feel like the world is only one thing, I can come back to this and take my blindfold off. The world is a whole myriad of things and this book has all the right questions to help you answer within yourself who your are, what you want and how you love.