No writer is the same, and through the years we’ve heard of several expected and several unexpected ways of writing.

Haruki Murakami believes in repetition, doing the same thing every day. He’s said that he wakes up early every day, writes for five to six hours, exercises, enjoys a book or some music and goes to bed again only to repeat the exact same the next day.

Jack Kerouac had rituals by the moon, he lit candles and considered himself quite superstitious when it came to numbers and his rituals. He said he best wrote in the midnight hours until daybreak. Nocturnal as many creatives are.

Earnest Hemingway was famous for writing while standing up. Quite a different experience back then with an old typewriter, that with todays technology.

Joan Didon had a habit of sleeping in the same room as her novel as she was in the finishing phase.

Myself I write whenever inspiration strikes, and that can be anything from hours a day or a minute a day. If I hear a word and that word inspires me, I shut down everything else I do and write my heart out until its empty. I have books, napkins, notes on my phone, voice recordings, pictures, videos and everything else stacked everywhere with accumulated inspiration. 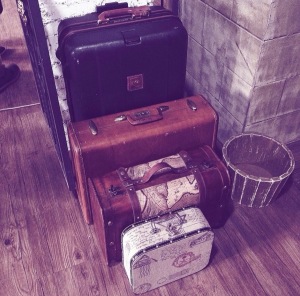 When I want to actually sit down and work at my writing I make sure to pack away everything else, and unpack all my gathered inspiration and I start going through it. Wherever I get a feeling or feel the urge to say more, that’s where I start. And I don’t stop until I’ve run empty. Sometimes words just flow, other times I sit and read a dictionary and sometimes I just have to give up and read a book or listen to music.

Jodi Picoult said that you can’t edit an empty page. And like her, I don’t belive in writers block. However, sometimes I do find myself at a dead end. If I sit there and think about it, I can sit there forever. I’ve done that too. I’ve stared at the sentence at the page and wondered for weeks how I’ll ever finish it. Here’s the trick; write something else. 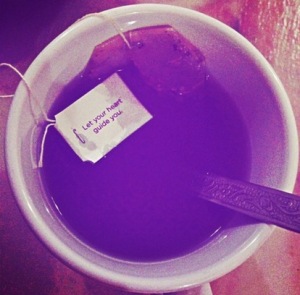 But like Kerouac I am also guided by other things than logic. For me, it’s my heart. I go with whatever just feels right. It doesn’t have to make sense to anyone but me. And that’s the power of it, the fact that I belive in it and it gave me something. Then I don’t so much worry about the reviews or comments that people have.

And I’ve taken what E.B.White said to heart: “A writer who waits for ideal conditions under which to work will die without putting a word on paper.”

So I write on my computer in bed, on my phone at the morning commute, at post it notes at work, on my arm if I have to or anywhere I possibly can. And I add that to the pile of my inspiration collection. (Not the arm of course, that has to be transferred to paper :-P)

So how about you? Do you have any rituals?